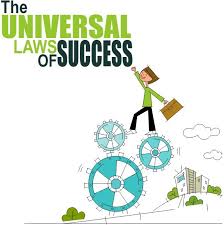 We all live in an ever changing and ever evolving universe, governed by nature, with her universal laws. Now, although universal law is not a respecter of persons and works for all alike, it can be personalized through our individual application.

For example, electricity operates by the same law no matter who is using it, or where it is being used. We never step into our homes, switch on a light and hope that it works, (unless we haven’t paid our bills) we trust the universal law governing electricity.

The external world is governed by many such laws, and of course if society goes against them, there are repercussions, but this is not the wrath of God sitting in judgement but simply universal law bringing everything back into line with it’s principles.

This happens both internally and externally as all life and all that exists is connected energetically from the one Source, to which humanity has given many names, explanations and descriptions.

So how do we apply these laws and how is it that we can use them to hinder our progress as well as accelerate it?

Well the first thing to do from a practical point of view is to identify something within our lives that requires dealing with every day, and for the purposes of this explanation, lets begin with a common theme running through most peoples lives, if not all, and that is: money.

Many people think that to become more affluent, all they have to aim for is having a bigger bank balance, however having such a short sighted approach can lead people to become greedy and to hoard their money out of the fear of losing it.

There is never enough if you continually say, more, more, more, so consequently when an individual has only a monetary concept of affluence, then regardless of how much money they accumulate it is NEVER enough. So as strange as it may seem, having so much more than we need actually becomes a statement of lack, not of abundance.

However, when an individuals relationship to money becomes one of sharing and circulating, then the law of reciprocation activates in such a way that money freely comes back to them.

If we take our cue from nature, we can see that we live an abundant universe, the same cause of this abundance through a creative act, has taken the form of each one of us. We are predisposed to abundance because the Cause of the universe is abundant and we are made of the same stuff.

Those who believe that the source of abundance and affluence is the material world are actually poor in spirit, whereas those who know that they are one with the universal Cause of existence, are rich in spirit because of the realization that as they align themselves with the universe there needs will be met.

Wants and desires generate our intentions, whether it’s enlightenment or a luxury car, it’s still basically a want, and wants vibrate at a specific energy level. So there become two distinct levels of want, and we must be able to recognize the difference between them if we are to move in the right direction.

Immature wanting originates within the conscious mentality and simply repeats in parrot like fashion, “I want, I want, I want”. It’s a wanting to want mentality, and individuals who operate with this want, are coming from the poverty mindset of “I don’t have enough”. This leaves the individual hungry for the “more” which can only come from them internally, not from the material external world.

The Mature level of wanting is all about the individual wanting to know more of who and what they are, and their purpose in life. They want to express their true nature of love, creativity, abundance and generosity, and the desire for good, which they possess, they also desire for everybody.

When you embrace this personal law of life, you are immediately aligning yourself with the true nature of the universe and from this generative consciousness your needs are met. A quote from the Hindu, Taittiriya Upanishad, says: “He who realizes the sphere of space hidden in the cavern of his heart grasps all that may be desired and comes into contact with the Immensity”.

To have a conscious realization of that Immensity is the desire that satisfies all desires and is our TRUE wealth.

So that’s it for today, I hope you found this Blog post helpful and that you are now a little closer to learning how to set universal laws in motion

To Your “Abundant” Success.
-Jon

P.S. The Law of Attraction is Working all the Time Whether You Know it Or Not. However, Using it To Create The Life That YOU Want is Another Thing and Can be Difficult Without Learning How to use it The RIGHT Way.

So, You Can Begin The Process of Learning TODAY By Following The Instructions Contained Within These 3 FREE Videos From Legendary Law of Attraction Practitioner Joe Vitale.

This entry was posted in Law of Attraction, The Mind and tagged Abundance, abundant, how to set universal laws in motion, money, universal law, Universe. Bookmark the permalink.